A video with a story from my childhood, about fishing on the Chesapeake Bay, and about my father’s experience on Normandy Beach on D-Day. An edited Summary follows the video …

I have a very short story to tell you from my childhood, and a lesson that my father taught me when I was about 13 years old.

In the summertime he used to take my siblings and me … whichever of those had arrived by then … out on the Chesapeake Bay in a motorboat. The mission of the day would be fishing, right? And so, that’s a pretty serious endeavor.

First we would learn how to navigate, because, if you go in the wrong place in the Chesapeake Bay, you run up onto the shallows, and foul up your propeller. Or else, you are in danger of being run down by the speedboats that go up and down the channel.

So you have to learn about the signal buoys, and what they mean about the channels that you can go in, and which side of the buoys you need to be on, to avoid other water traffic.

So that was the first lesson. And we got to a place that looked likely for fishing, right? The Chesapeake is a little choppy, and so the boat would be rocking back and forth. And then, when we would cast into the bay with our fishing lines, there would be a movement of the boat that would push it in a direction that frightened me, because it seemed likely that we would capsize … especially when my dad cast.

He was heavier than I, because he was grown, and so he would cast, and the boat would shift sideways, plus there would be the waves, and if there was another boat coming along, usually they went pretty fast, and so they would create that … I do not know what you call them … it is that wave front that goes along with them, and is much larger than the normal waves of a quiet bay.

I had all these things to contend with, because I was basically a landlubber. And I was about 13 years old. Even in those days, I always wore glasses … reading glasses, especially … and I carried them with me all the time, because I was an avid reader, right?

So I had my glasses, but I did not need them at the moment when I was fishing. I had my hands full, trying to figure out what to do. Plus, I was holding onto the edge of the boat. [chuckles]

The long and the short of it is: I sat down on my reading glasses. And I broke them in the middle. It was the first time I had ever done anything destructive to my reading glasses, ever … My father found out, and he was grimly angry about it. In those days, we did not have the money to put out for another pair of glasses.

So I got an explanation about how, even if we are in fear of death, because of the rolling of the boat, and the commotion of the predator/ prey relationship that was going on with regard to the fishing and the other boats going by, and so forth … no matter what circumstance we find ourselves in, we need to exercise neutral mind. We need to know where we are, and we need to avoid actions that will cost us in the future. In this case, it had to do with replacing the glasses.

I thought about that today, and I thought about my father’s life, before he had a family. I thought about how he was a member of the Seabees, and he was in charge of one of the barges that ferried the equipment and the people into the Beach of Normandy on D-Day.

And when all was said and done, for his entire platoon, no one survived but he. I think that the reason for that was that he was very cool under fire. And under life-threatening circumstances, he kept his head and his neutral mind, and preserved what he could … whether it was, hopefully, the lives of his crew … because I know it cost him, all his life … the thought that everyone had passed on but he … or whether it is just your own life, if that is all that you can do.

That was the same lesson that he was trying to teach me, when I sat on my reading glasses in the Chesapeake Bay.

So there you have it: My thought for the day. My thought about my father, who was so courageous under fire. And who bore with him, all his life, the sadness of so many deaths on that day. 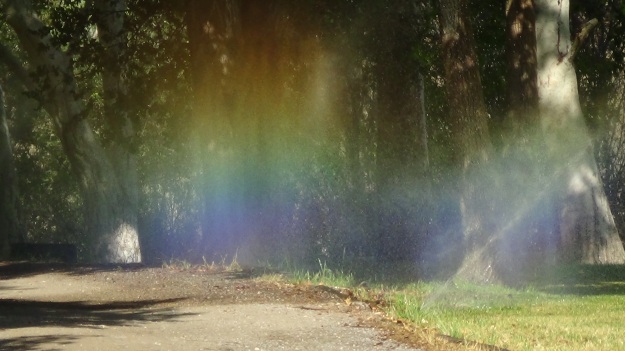