Here is a mudra to help clear and consolidate the energies of the throat chakra (the fifth chakra) and the third-eye point (the sixth chakra). There is a Summary after the video …

In these days of the current Solar Maximum, more and more people are arising to Awareness of their fifth and sixth chakras as they find themselves encountering the wondrous new worlds of the Fifth and Sixth Dimensions. As these people arise to Awareness, those chakras begin to clear and to be purified of any negative energies … any malware. As they are arising and clearing, the impurities that are leaving their energy fields may impress themselves upon the Lightworker.

I have discovered a mudra that helps strengthen the throat chakra (the fifth chakra). This is the chakra that, when we place our Awareness on it, brings us into the Fifth Dimension.

What that does is, it creates in the throat chakra a close-knit, healthful vibration of energy … not the type of energy where strands are going out here or there as people claw into a person’s throat, with this or that negative emotion, from the astral plane or the telepathic plane, and attempt to silence a person’s voice and insert their own voice into the person’s throat chakra.

What it does is it consolidates the energy of your own throat, and creates a healthful, centered, stable energy field there.

The mudra is with hands clasped … four fingers together, two thumbs crossed, with the elbows relaxed by the side, the hands out at the level of the navel point. 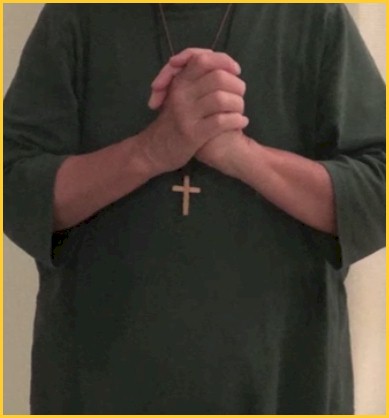 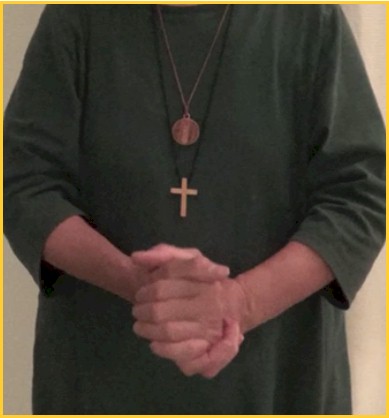 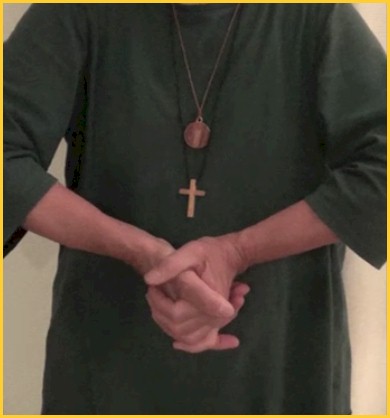 See how loosely the hands are folded together? Very loosely. There is no tension there. My thought is that what we want is a ‘together’, but not torn open or expanded or destabilized chakric field for both the throat chakra and the third-eye point. (I will mention the latter as the video goes on.)

I am holding this mudra at my navel point … the center of will. I could be standing or sitting.

I look down towards my hands, and I am imagining and saying to myself silently: This is how my throat chakra energy is right now.

It is very important to visualize and imagine, at the same time as we silently speak the words. You are looking down, and you are imagining that the energy of your throat is exactly in the sort of configuration of this loose, hand-clasped mudra. [Looks down at clasped hands.] My throat energy is exactly like this.

You could use the same visualization and mudra for the third-eye point if black magicians and those sorts of people have been drilling into it and attempting to take over your mind.

You could look down at your clasped hands, which are at the level of the navel point, and imagine that the third-eye point energy is like this: Loosely clasped, cohesive, not torn, but carefully put together energy.

This is the Hands-Clasped Mudra, good for healing of the throat chakra (the fifth chakra) and the third-eye point (the sixth chakra) as people are becoming more and more aware of those energies, and yet, during this Solar Maximum, they may not be completely clear or pure in the energies that are there. They may be impressing those impure energies on your own energy field.

And so these two exercises of loosely compacting and carefully arranging the energies of the fifth chakra and the sixth chakra may be very helpful to the Lightworkers in the current Solar Maximum. They may allow us to transform to the Light negative energies that are cast in our direction … or that we, as empaths pick up on … so that we can be pure Light once more.

That’s all for now.

God bless you all,
And keep you safe,
And be with you
Through all your days.